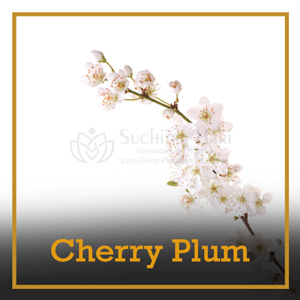 Blooms: between February to April

Fear of the mind being over-strained, of reason giving way, of doing fearful and dreaded things, not wished and known wrong, yet there comes the thought and impulse to do them.

Indication: For those fear that mind will give away.

Cherry Plum is a great remedy to restore mental balance when it is in danger of being overthrown by irrationality. In negative Cherry Plum state people are afraid that they are heading for a breakdown, and losing their control. The nerves are stretched and where one may feel as if a bomb is ticking inside, waiting to explode.

Cherry plum can help children who are hysterical, delirious or have sudden impulse to do something out of character.

The action of this remedy if to calm the frightened and diverted thoughts and bring about a more rational state of mind.

I choose to be balanced and stable at all times.

I am in control.

Animals to can be in Cherry Plum state. Suppose and animal is suffering from an irritation condition or infection may lose its self-control until the irritation is eased, and violently scratch itself in a desperate attempt to find relief. (please note Bach remedies do not work on physical symptoms, they work on emotional state which may in turn supports physical condition)