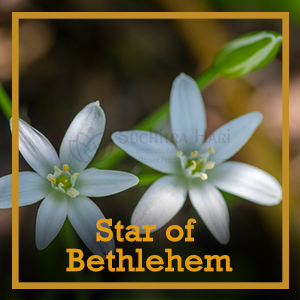 Blooms: From April to May

Belongs to ‘Despondency or despair’ Group

For those in great distress under conditions which for a time produce great unhappiness. The shock of serious news, the loss of someone dear, the fright following an accident, and such like. For those who for a time refuse to be consoled this remedy brings comfort.

This remedy can help when one encounters bad news or unexpected events like bereavement which has led to  shock. Usually this is caused by a sudden event, or when someone receives unexpected bad news. The remedy comforts in the time of distress as well as can treat effects of shocks in the later years of life.  This remedy can comfort the pain after the shock and bereavement.

I am calm and feel soothed.

I have recovered from my past trauma.

Animals who have suffered abuse, mistreated in the past can benefit from  Star of Bethlehem. This remedy can help soothe the sadness and help them release the shock that was caused because of unpleasant events.