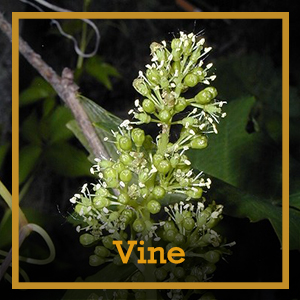 Blooms: In warmer countries and hence time of blooming varies

Belongs to ‘Over-care for the welfare of others’ Group

Very capable people, certain of their own ability, confident of success. Being so assured, they think that it would be for the benefit of others if they could be persuaded to do things as they themselves do, or as they are certain is right. Even in illness they will direct their attendants. They may be of great value in an emergency.

Indication: For dominance and inflexibility

Vine people are leaders. They are strong-willed and know their minds. They make excellent, clear minded guides, but in their negative aspect may be inclined to use their mental strength to dominate others. In this state they may be ruthless and aggressive and even cruel in their efforts to get their own way. They may ride over weaker personalities and will instruct and order people around. In negative state they may dominate rather than lead.  This remedy can help this negatively charged energy with the positive qualities of Vine.

I am a confident and understanding leader.

I am balanced, humble and kind.

Vine animals are authoritative. They like to assume authority over other animals around them. Younger, small or weaker animals are in awe of Vine and may become nervous in his or her presence.  This remedy makes them less controlling.